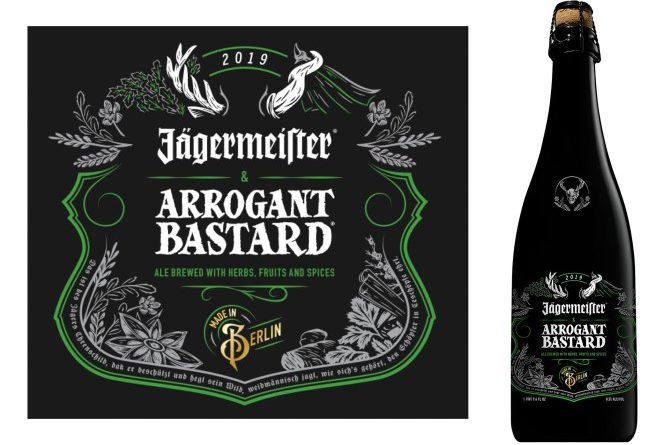 Arrogant Bastard Jägermeister Ale is headed out to select markets now, a Germany brewed special release for the U.S.

A staple in nearly every bar in America – Jägermeister. The herbal liquor is made with 56 different herbs and takes more than a year to produce. Jäger’s headquarters is in Wolfenbuttel, Germany, nearby Stone’s Berlin brewery that they sold this year. The last collaboration from Stone Berlin is debuting this month- Arrogant Bastard Jagermeister Ale.

The base beer is Arrogant Bastard Ale, an American strong ale that is the flagship beer of Stone’s Arrogant Consortia, the cocky brewing subset of Stone Brewing. According to Lizzie Younkin, public relations manager for the brewery, the beer was brewed after the sale by Stone’s brewers that were hired by Brewdog as they took over the Bern facility. A few senior brewers from Stone’s Escondido brewery also traveled to Berlin to oversee the final pieces of this collaboration.

Jagermeister Arrogant Bastard Ale is brewed with similar spices as the digestif counterpart according to Stone. While the brewery hasn’t disclosed which spices, some of the most notable in Jager are anise, poppy seeds, citrus peels, juniper berries, licorice, and ginseng.

Neither beverage has now, or ever contained deer blood. Sorry internet theorists.